Temples and pagodas in hanoi

temples and pagodas in hanoi

Vietnamese people visit Pagodas in their hundreds of thousands at the start of the Lunar New Year to offer gifts of money, fruit, food and flowers to the Buddha and pray for a happy and healthy year. It is an age-old tradition that continues to this day. The most famous pagodas in Hanoi are: 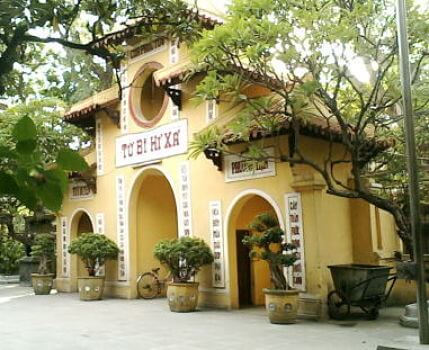 The temple attracts numerous worshippers and visitors daily. Inside there is a feeling of peaceful tranquillity and is a precious treasure of Hanoi.

Dating back to the 11th century, this is a Taoist temple. One of Four Sacred Temples built in the capital to protect the city from evil spirits, they stood in the north, east, south and west corners of the ancient city.

Located at Hoan Kiem Lake, the “Temple of the Jade Mountain”, is one of the most picturesque temples in Hanoi.

One of the worlds most beautiful temples in the city.

Also known as the Perfume Pagoda, it’s location is within the Huong Tich mountain range. It hosts the largest Buddist festival in the country, and thousands upon thousands of Buddhists and tourists visit every year from the first lunar month to the end of the third. Enjoy the stunning landscape and enjoy a boat ride to reach the huge complex of temples and shrines.

This pagoda is situated next to the West Lake. Thousands of pilgrims flock to this popular pagoda, especially at the new year. The mood here is much lighter and more relaxed than in others, and people enjoy the worship and the location next to the lake.

A large, ancient temple, the people here worship the goddesses and mother goddesses of the Vietnamese indigenous religion.

The temple was originally constructed in the 11th century and is Hanoi’s oldest place of worship. Extensively restored during recent years, it is beautifully decorated and still in use.

This famous temple, built under the Le Dynasty, has become a popular place of worship, especially during the Tet festival and other holidays, for giving everyone good luck.

Originally built in 1049 during the Ly Dynasty, it was the site of royal ceremonies celebrating Buddist events. Built of wood on one stone pillar the shape resembled a lotus blossom. Its importance was recognised in 1962 when it became a national historic treasure.